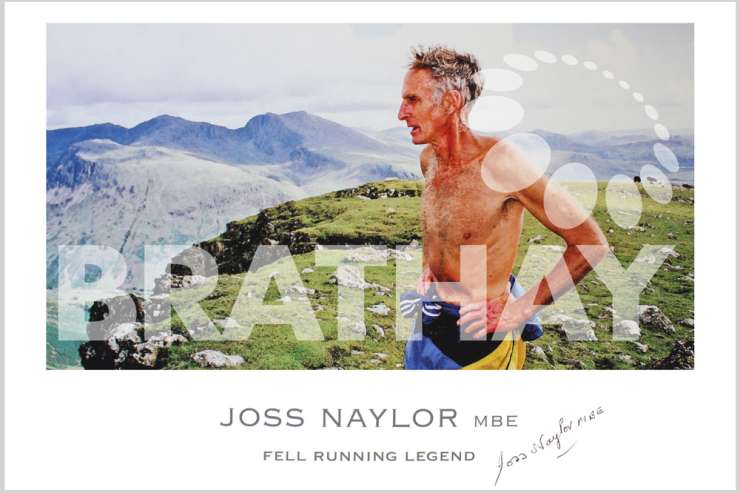 Please note, this image appears with a "Brathay" watermark to prevent the production of copies. The watermark won't appear on the picture you purchase.

There are a limited number of these pictures being offered - all hand signed by Joss making each one unique.

Pictures will be dispatched by 2nd class post unless you wish to collect from Brathay Hall, Ambleside, LA22 0HP.

A Brief History of How This Image Originated - Steve Hughes (Photographer)

In the Autumn of the year 2000 I was walking with a friend in the Western Fells of the English Lake District on a route from the Eskdale Valley to Buttermere and after descending into the Wasdale Valley we climbed over Yewbarrow and up onto Red Pike, intending then to go over Pillar and drop down from Black Sail Pass into Ennerdale and so on to Buttermere.

Whilst we paused for some lunch on Red Pike and to admire the breathtaking view, I casually mentioned to my friend that all we needed to make the day perfect was for "Joss Naylor" to come running over the horizon. I can't exactly remember how much time passed between me opening my mouth and saying those words but when Joss almost magically appeared over "said" horizon, if felt like we were hallucinating and he was looking as lean and mean as ever. Being the great gentleman that Joss is he stopped to pass the time of day with us and very kindly let me take some photographs of him and then he was gone as swiftly as he appeared.

When I got the film developed and printed I realised I'd managed to capture something special that day - a rare combination of a man in his ellement in one of the most beautiful and spectacular places on earth. A friend of mine who is a Graphic Artist suggested it could be further enhanced by scanning the original and applying a subtle filter over the entire image in Photoshop. This has given the photograph when looked at in close up the feeling of a painting on canvas, further enhanced by the mild structured surface of the fine art paper. Other than that the image is an original untouched photograph.

Thank you for your donation to the Brathay Trust