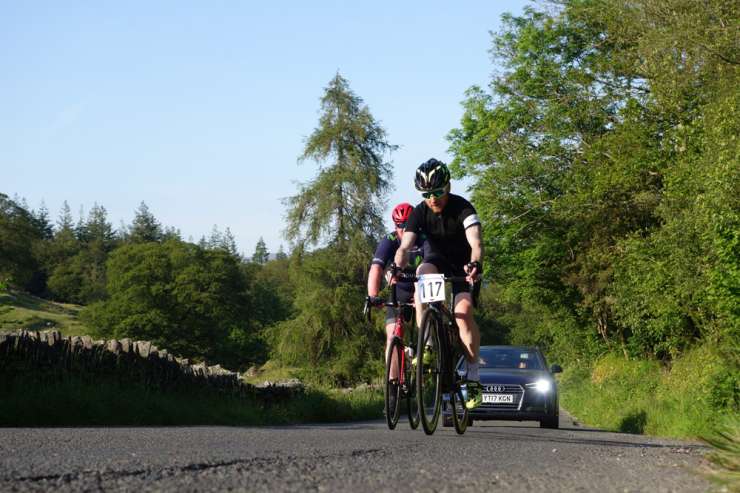 At the crack of dawn on Saturday (22 June) seven incredible athletes set off to tackle the Brathay 262 endurance cycling event.

They had 24hrs in which to cycle 10 laps of England’s largest lake, Windermere. It involves a total ascent of 19,500 feet, the equivalent to cycling up Mount Kilimanjaro, along roads totalling 262 miles, equal to a journey of London to Kendal.

The riders put their physical and mental endurance to the test in support of our work with vulnerable children and young people.

Donations are still coming in, but the third annual Brathay 262 is on track to raise over £4,500 through a JustGiving campaign.

Respect and congratulations also go to Helen Renton who did six laps in 13:07:50, Jonathan Southall whose five laps took him 12:23:21 and Paul Moseley who did a very speedy three laps in 5:48:20.

Sean, Duncan and Helen are no strangers to the route having tackled it on foot as our Brathay 10in10. That’s a marathon every day for ten days.

“The event was a particular epic feat of endurance this year because the humidity levels were so high” says our Head of Fundraising, Scott Umpleby.

“What’s amazing is that it’s so hard yet those who tackle it say incredibly positive things about this unique event. Rather than see the 10 laps as being too repetitive they like it because they get to know the demanding route which helps when tiredness sets in. Riders also say they really appreciate all the support they get at the main re-fuelling station at Brathay with everything from energy drinks, hot food, bike repairs and hugs on offer.

“We would also like to thank everyone involved in making this happen from the cyclists and their supporters to our amazing volunteers; as well as the companies and organisations who donated refreshments,” adds Scott.

Anyone interested in entering the 2020 Brathay 262 can find an enquiry form here.

Results from the event are available here.