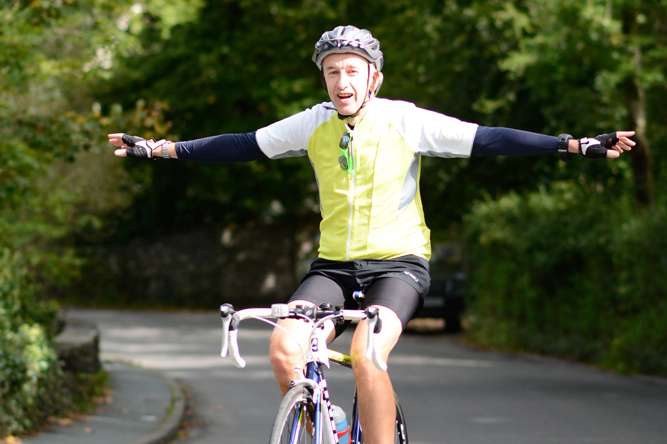 A year in the planning, it was the brainchild of charity supporter Paul Sutherland (pictured during the event, above). He ran the course as Brathay’s ‘10 marathons in 10 days’ challenge in 2015 collecting over £3000 for our work with children and young people.

“There’s a massive interest in top end cycling events that are technically challenging and take place in stunning settings. A circuit around Windermere lake ticks all those boxes. Over the 10 laps, which had to be completed in 24 hrs, the total ascent was 19,500 feet, the equivalent to cycling up Mount Kilimanjaro, and the distance travelled - 262 miles –equal to a journey from London to Kendal.

“The test event went better than expected thanks to an excellent operational team made up of Network Rail employees and physio students from the University of Cumbria. It revealed some learning points around visibility at night and road hazards. Despite the full moon it was still quite dark because of the leaf cover and this impacted on speed. As did unexpected road hazards; wildlife at night and tourists by day, who were often oblivious to the road at Bowness Bay” added Paul.

The first rider back was Steven Leonard, from Chorley, who managed the course in 18 hours. Simon Woolhead, from Leighton Buzzard, was second back with a time of 20 hours. In third place was Heather Dye from Surrey who took 21 hours to finish.

Five of the riders completed the 10 laps in 24hrs, one took 27hrs and four others managed between seven and nine laps.

Following the success of last month’s pilot (16 and 17 September), we're planning to offer the ‘Brathay 262’ as an event in 2017. Anyone interested should email Aly Knowles: alyson.knowles@brathay.org.uk

Summing up, our Head of Fundraising, Scott Umpleby said:

“Brathay 262 is the brain child of some rather amazing athletes, some of whom had already proved themselves with our ‘10in10’ event for marathon runners. The riders faced the unenviable task of staying awake for 24 hours, whilst battling physical exhaustion and mental fatigue as they tackled a challenging circuit 10 times. I am impressed at the efforts of all 10 cyclists and in particular the five who completed the course within 24 hours. Everyone at Brathay appreciates the money they raised to support our work and that we can now offer this as the newest, toughest road cycle stage race in 2017.”