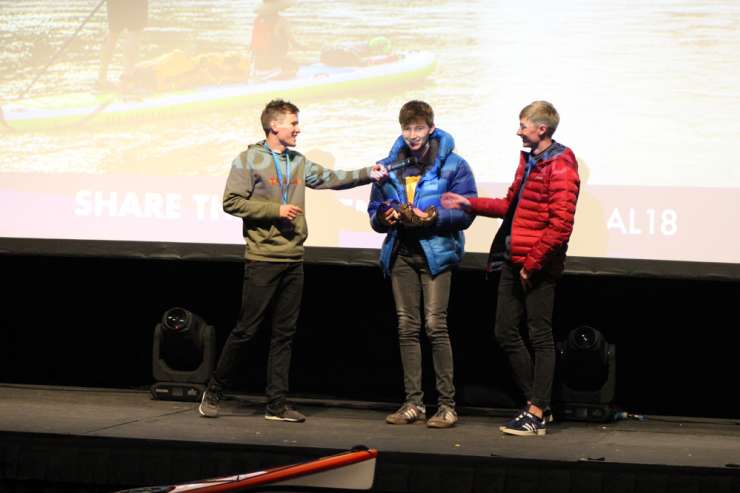 A short film by two 16-year-olds has premiered at a special screening of the 22nd Kendal Mountain Film Festival.

Set in the Lake District, we are delighted that there’s a dedication to our Young Minds Matter Appeal, it was filmed and edited by Nathan Young and features Jonah Monks.

It tells the story of a mountain bike enthusiast who sets off to meet a friend saying he will go ‘The Long Way Round’ – the film’s title. Jonah is seen getting ready, setting off and taking an adrenaline-fueled ride from the top of Garburn Pass into Troutbeck, near Ambleside.

Nathan, who credits Jonah for the idea, says they spent the summer scouting and started filming in September. It took two months to complete. This is Nathan’s first major film, although he has been film-making ever since being given a Panasonic camcorder and directing his sister to act. He hopes, after completing A Levels at Kendal’s Queen Katherine School, to study film production at York University.

Nathan said: “It was an absolutely fantastic experience. It taught us a lot, was fun to make and the final product is way better than we ever could have imagined. Continuity – of weather and leaves – made things difficult. We needed lots of glorious sunsets and leaves that didn’t change colour.

“The only help we got was lifts to the location, out of seven visits we were only able to film on four occasions. Fortunately the only real problem occurred on the last day of filming when Jonah’s bike frame snapped” added Nathan.

“But, we got to spend time in an amazing location, doing what we love, and learning a lot. After hours upon hours of work, and 100% effort, it is the best of rewards to have our film shown at such a world-famous festival for the outdoors and adventure.”

Nathan says the dedication comes from seeing friends go through a lot over the last few years from exam stress to family problems. He said: “It makes me realise how important support for young people is and sometimes it can be the smallest things that create anxiety and depression. Brathay give young people a safe haven, at their residential base here in the Lake District, restoring their confidence and self-belief.

“We hope this film raises the profile of their Young Minds Matter Appeal and its significance for people of our age. We also want to entertain through an exciting adventure set in the stunning Lake District National Park. It is very much a film of the area, we are lucky to live in such a beautiful place.

Brathay’s Head of Fundraising, Scott Umpleby said: “It’s fantastic to see two local young people combining creative film making with adventures in the outdoors. This short film and the approach taken by Nathan and Jonah is a great example of taking opportunities on your doorstep inspire others through adventure.”

Commenting on the young film-makers success, Ian Palmer, a director and cinematographer said:

“It’s great how the film maker has used the natural golden glow of evening light to make the Lake District and the adventures on his door step look even more inviting.”