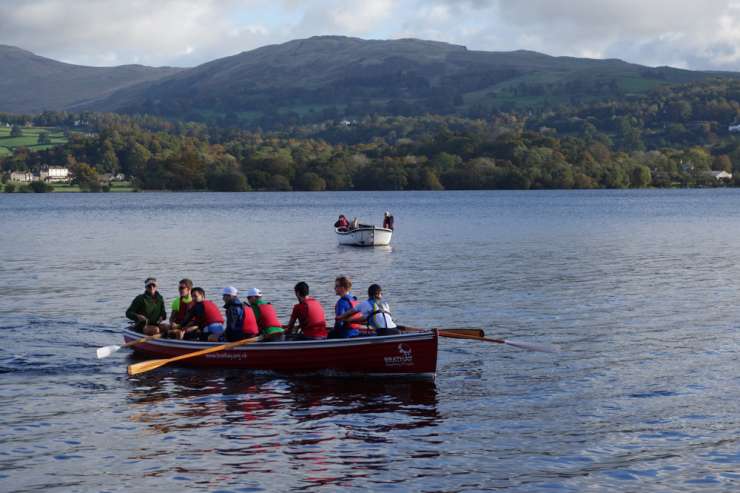 Businesses have raised over £10,000 for young people from Furness by completing a rowing and running challenge on Windermere at the weekend (Sat 12 October). Their efforts meant there really was a pot of gold at the end of a rainbow which made an appearance during the challenge.

Their timed challenge, which began and ended at Brathay Hall at the north end of Windermere, was devised by us as a fundraiser. Each team had to row to three points on the lake and send a pair of runners up and down three fells - Latterbarrow, Gummer's How and Wansfell.

First back was the Newcastle University team in a time of 6hrs 58mins – a new course record, followed by BAE Systems in 7hrs 59mins.

This is Brathay’s seventh RowRunner and Scott Umpleby our Head of Fundraising explained why it was so important:

“This year’s RowRunner is about raising money to help Furness young people living in care, or on the verge of entering the care system, with unstable or difficult family lives. They are inspired to build their confidence and set goals to help them find employment and live independently.

“Life can be incredibly tough for them and it’s really great that businesses have rallied around to support them. This is the third year that BAE Systems Maritime have sponsored the event. Their support covers all the operational costs which means that every £1 donated goes directly to help disadvantaged young people,” added Scott Umpleby.

Scott says it’s also a great team building exercise as each member has to commit to the training and to literally pulling together on the day.

"It was a pleasure to be involved with the fantastic RowRunner competition. BAE Systems Submarines is proud to sponsor such a worthwhile event. This year's was better than ever, and let's hope it goes from strength to strength. Let's also hope the shipyard team goes one better next year and is able to claim the winner's trophy."

“It’s been an absolute pleasure, and the team got to understand a little bit more about the magic of Brathay. They really enjoyed it, it went so smoothly and we thank you for your first class organisation.”