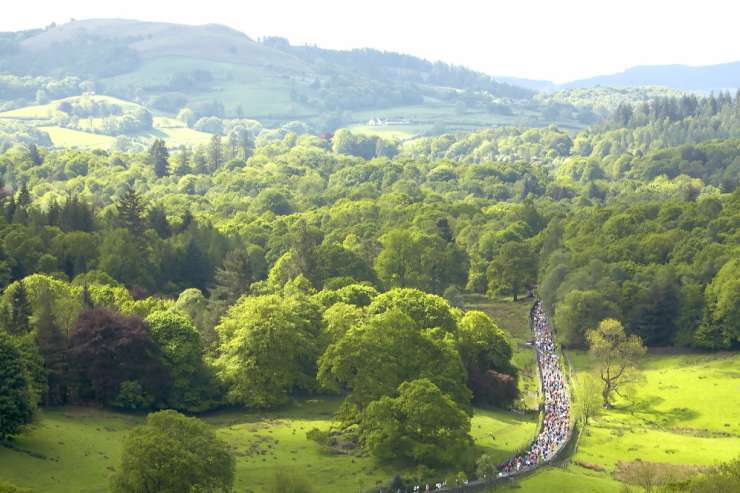 The latest to join a handful of marathons run entirely within a UNESCO World Heritage Site, it is often described as the friendliest and most beautiful UK marathon.

Over half the course is run on partially traffic-free roads or roads with a dedicated running lane. It takes each runner 33,000 steps to complete the route, volunteers will hand out 10,000 bananas from eight refreshment points and amongst the spectators are 500 sheep.

It’s hilly, breath-taking course, can attract as many as 1,000 runners whose fundraising efforts directly support our impactful work with young people.

Race patron since 2007 is legendary fell runner and shepherd 81 year-old Joss Naylor MBE. Ahead of official race duties, and continuing his support for Brathay, Joss plans to run his own fundraising marathon over the fells from his home in Wasdale taking in Scafell, Scafell Pike, Langdale Pikes and Loughrigg.

Those crossing the 2018 finish line will receive a new medal depicting an iconic scene from their route. Kentmere artist George Grange has produced four designs for a series of medals that will be presented to marathon finishers over the next four years. The silver coloured medals fit together to create a scene representing the route. They show Brathay Hall, the picture-perfect start and finish line, and the villages of Hawskhead, Bowness and Newby Bridge.

Aly Knowles, Brathay’s operations manager, says such is the magic and appeal of the marathon that those who run it often go on to tackle Brathay’s 10 marathons in 10 days challenge. The ASICS Windermere Marathon is the final marathon for those running the ‘10in10’.

We have been successfully improving the life chances of young people for 70 years. Last year (2016) we worked with over 7,000 young people providing them with support and development in their local communities.