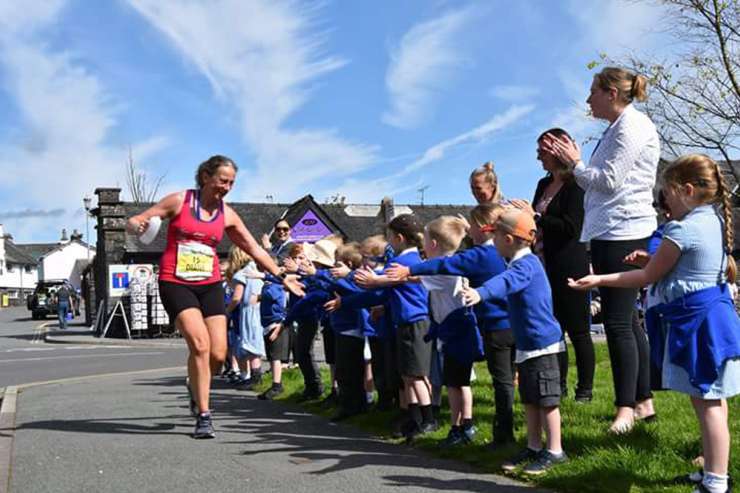 Our fab 10in10 runner Diane Morris finished the year on an inspiring note. She has completed 52 marathons, averaging one a week. Working as a Night Carer in a residential home for the elderly, and with six children and three grandchildren, she has a lot to juggle. Here Diane tells us what it involved and why this challenge.

"This year I turned 52-years-old and set myself a 52in52 challenge. Securing a place on the 2018 10in10 helped to confirm this decision and provided a solution to the planning question I had. Due to work commitments, I couldn't run a marathon every weekend. This meant using multi day events as much as possible.

I started the challenge on February 1st with the Enigma Quadzilla, a four day event in Milton Keynes. This was the first time I had taken part in a multi-day event and it was very much a learning experience. My 10in10 team mate Davey Green took me under his wing from the start making the four days a very enjoyable and valuable time.

Brathay 10in10 has been the highlight of my running year. This was not just because of the running but also the support and friendship from the rest of the team and support crew. Since May, I have run several marathons where team members have also been running. It is always good to see fellow 10in10ers and this adds something special to the event.

I completed two Votwo challenges, the Jurassic Coast Challenge in March and the Atlantic Coast Challenge in October. Both were three day events covering 78 miles of the coastal path and both proved to be very challenging. These events test your mental strength as much as your physical ability but are also great fun and give a huge sense of achievement on completion.

Running 52 marathons in 52 weeks has been tough both physically and mentally. There have been times when I haven't wanted to run or get up early when travelling to events. I have been fortunate in not suffering from any serious injuries although some aches and pains have been inevitable.

I ended the challenge with the Newark Showground Christmas Challenge on Saturday 15th December. Several members of my running club were there to support and to run with me along with my family and some of the 10in10 team. It was lovely to have so many friends there cheering me on every lap. Adam Holland made the day even more special with a 52in52 race number and plaque and then presented me with my medal and 52 shirt after the race.

The next day we went back to Newark Showground for day two and another marathon which 10in10 team mate Graham Dewar ran with me. It felt great being able to run it wearing my 52 shirt.

Now for my next challenge..." (Diane’s back for a second 10in10 challenge)