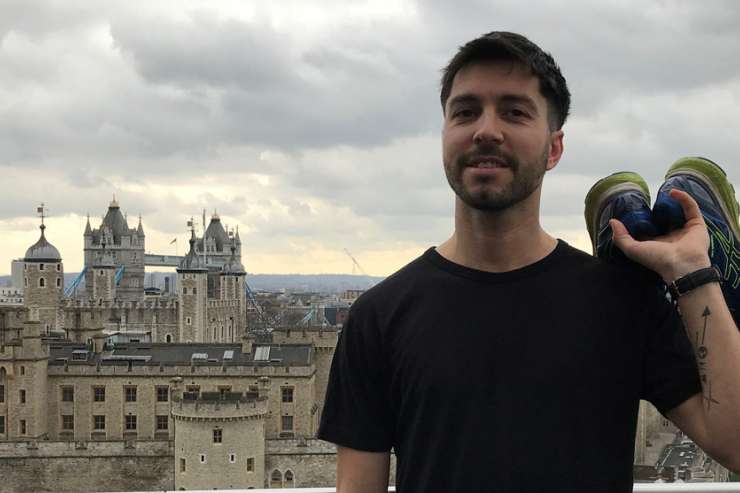 MasterChef semi-finalist Matt Campbell is running two marathons in April, in memory of his father and to raise funds to help vulnerable children and young people being supported by Brathay Trust.

The talented 29 year-old chef from Cumbria is also hoping to run one of the marathons, either the ASICS Greater Manchester Marathon (Sun 8) or the Virgin Money London Marathon (Sun 22), in under three hours.

His attempt coincides with one of his busiest years yet as a professional chef on the back of making it through to the semi-finals of MasterChef: The Professionals (2017). This year Matt has cooked for Hollywood A-listers at the Oscars and he is embarking on a series of events around the country showcasing his cooking and ‘Nutritional Gastronomy’, elegant dishes loaded with superfoods.

“My dad Martin entered me and my brother into our first marathon in 2016, Brathay’s ASICS Windermere Marathon. Brathay is a charity he absolutely believed in, recording the trials and tribulations of the runners who took part in their 10 marathons in 10 days fundraiser for eight year’s running.  He died in 2017 and that year I ran my second Windermere Marathon in three hours and three minutes. It was a very special moment raising over £1,000 for my father’s Brathay memorial fund supporting Brathay’s work with children and young people.

“I trained for my last marathon following an exclusively vegan diet for three months. This year I started my training whilst on ‘Veganuary’ - vegan January. I am currently developing a new type of cuisine, "nutritional gastronomy", so I am eating interesting thought-provoking food with great flavours, not just plain pasta and bland carbs.

“I keep myself motivated with music and the scenery. I've been lucky to train in the French Alps, the South Coast of France and in the Lake District, so I only ever seem to run in stunning locations. Running for me is also a great time to think, away from my phone and social media. I use the time to plan menus and think of interesting flavour combinations to show that you can bridge the gap between the worlds of gastronomy and health” he explained.

The well-travelled private chef has shone in the kitchen from a young age. In 2009, aged 20, he finished second on BBC’s Young Chef of the Year competition and has worked in the kitchens of the famous, Michelin-starred restaurant l’Enclume, as well in venues around the world as a private chef.

“I love the challenge of a marathon, the drive it gives me in life and the determination to succeed and make my family proud” added Matt.

Matt will be joined by one of the 10in10ers, whose extraordinary efforts to run four 10in10s was captured by his father. Malcolm Collins (48) and from Leigh, Greater Manchester, is hoping he will have recovered enough from knee surgery to also run in the Manchester Marathon.

If you'd like to support Matt you can donate via his JustGiving page.