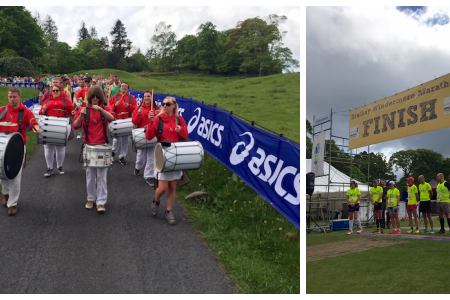 This was the third (and slowest) time I've run the ASICS Windermere Marathon, so I thought I'd sum up my ten favourite things about this race.

Number one really has to be the setting. The Lake District is undoubtedly one of the most beautiful spots in the country, if not the world, and having a lovely backdrop to look at while you’re slogging up some of those hills is a wonderful distraction.

Which brings me to number two - the hills. If you like your hilly trail marathons then this course won’t phase you. However, if you’re used to road marathons then this will feel very hilly indeed. While none of the hills are really massive (they’re all runnable, while you can still run) it’s hardly ever flat. But for all the uphills there are corresponding downs, if you’re the glass half-full type.

Number three is the cause it’s run for - the Brathay Trust. It’s a fantastic charity which gives help and opportunities to young people. It starts and finishes at the beautiful Brathay Hall, overlooking Lake Windermere, with a great big lawn for supporters to relax on and for runners to collapse on.

The start would have to be number four. You walk down en masse, before being whipped into a frenzy by a band of marching drummers, then the starter fires a shotgun. I think this sums up the many unique features of Windermere Marathon. This is not your standard road race.

I’d select the people at number five. The runners, the supporters, the organisers. They all give this race a very special feel. I’ve run this race three times and I’ve always been blown away by the lovely runners I meet along the route and the support of the volunteers and the spectators. I was offered sweets, gels, biscuits, flapjacks, drinks, and that was just from spectators, not from aid stations. It’s also one of the only races where I get called ‘lass’, which is kind of nice at my age.

Number six is the places you run through. Hawkshead feels like stepping back in time, running past stone cottages, over cobbles and through alleyways. In Bowness you suddenly encounter loads of people, which can be nice as they give you lots of support, but it can also be a bit of a pain when somebody is walking along brandishing a selfie-stick and not paying much attention. Then in Ambleside you know the end is in sight and the encouragement from all and sundry makes you very smiley.

Number seven is the weather. I’ve done this race in sunshine, rain and there was even a fairly violent hailstorm just before the start one year. It reminds you that this is the Lakes and it can throw anything at you. However, this year it was perfect sunshine and a cool breeze.

Number eight is the addition of a half marathon this year! This offers a great opportunity to run in a beautiful place but without having to go the whole hog and do a marathon. Seems like a sensible option to me.

Number nine must be the finish. Not only is it a very welcome sight, it’s full of fun stuff for families to do (climbing, high wire, canoeing) and packed with lovely food and beer! There are local produce stands, there’s a bar and there’s even ice cream. Everything you need.

Number ten has to be the ‘10 in 10’. Those brave souls who run the course ten times in ten days to raise enormous amounts for the Brathay Trust charity. When you pass these runners on your way round they inspire you and they also make you think ‘I can’t complain about my sore toes when this dude has done this ten times’.