It’s all about the bling 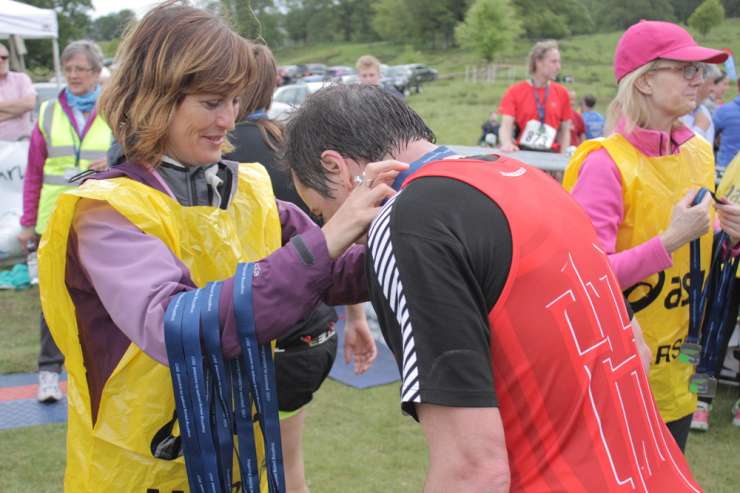 Those who cross the finishing line of our annual ASICS Windermere Marathon will receive a new medal depicting an iconic scene from the route.

Kentmere artist George Grange has produced four designs for a series of medals that will be presented to runners over the next four years. The silver coloured medals fit together to create a scene representing the 26.2 mile route. They show Brathay Hall, the picture-perfect start and finish line, and the villages of Hawskhead, Bowness and Newby Bridge.

It is hoped that the attractive medals will encourage more entrants to the race, already recognised as one of the UK’s most beautiful marathons, and now one of only a few marathons around the world to take place in a UNESCO World Heritage Site. We also runners will come back to collect all four medals, one design will be given out each year.

As Aly Knowles Brathay’s Head of Operations explained: “Every person who signs up for the marathon is helping to fund our work with young people so it’s important that we continue to attract runners. Medals for everyone who crosses the finishing line, not just the first three back, is now quite rightly a tradition in marathon running. The medals are so important, they are part of the runner experience and a badge of honour.

“There are some amazing medal designs. We think our four new ones are special enough to fit that category and we hope they will attract more entries. Some runners actually pick the marathon they’re going to do by what the medal looks like” Aly added.

Handing them out is the job of a small team of dedicated volunteers organised by Brathay’s Catherine Allen. The sales ledger administrator says the medal represents more than just running 26 miles on a Sunday.

“It’s the end goal of months of training and sheer determination to get around the course, particularly for those who may have been running for six hours or more” said Catherine.

“In some cases the runner stories are very moving” added Catherine. “One year we helped with a request from the family of a female runner who had suddenly and traumatically lost her fiancé a week before the race. She crossed a finishing line decorated with sun flowers.”

Catherine who lives near Grange-over-Sands has worked for us for over 15 years, with an 18 month break. She has been part of the finish line team at least six times and she says it’s a privilege to welcome the runners back.

“Our job is to make sure every runner gets the most incredible ‘well done’ which can include hugs, water, bananas and of course their medal” she added.

“You need to have lots of positive energy, to greet every single runner over the line and the medal is a big part of their finish. There are some amazing medal designs and I can’t wait to see ours.”

Aly Knowles said the charity was grateful to George Grange, who volunteered her time earlier in the year to design the medals and a fundraising pack. George, a visual arts education officer, said she approached Brathay because she had read about the charity and she thought it was a great organisation whose work was interesting. George was also helping out at this year’s marathon finish line which helped with her research.

She said: “I happened to have a day a week free for four months. The project made use of my skills but I also learned some new ones and brushed up my knowledge. Its’ been fun and I’ve felt well-supported in a friendly, helpful office. It’s also been great to work on two self-contained projects which I’ve been able to start and then see through to the end”.