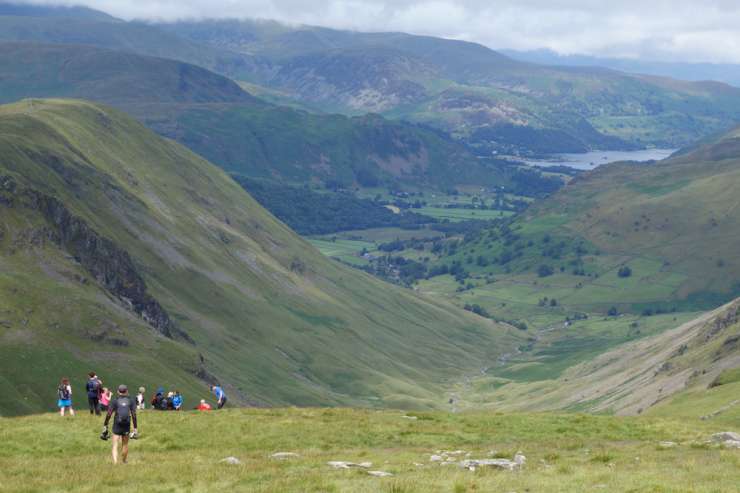 This weekend 83-year-old running legend, and shepherd, Joss Naylor MBE completed a fell race he failed to finish in his 20s, the 1962 Lake District Mountain Trial.

Joss is again raising funds to support us. He has been an active supporter and Patron of our annual 10 marathons in 10 days challenge for 13 years. During this time Joss has raised over £50,000 to help vulnerable and disadvantaged young people.

On Saturday (20 July) Joss set off from Kirkstone Pass in heavy mist to complete the missing section. His 12.5-mile route to Patterdale took him via the high fells of Stoney Cove Pike, Thornthwaite Crag and High Street. Conditions improved as Joss descended into Patterdale at Angle Tarn, via Place Fell.

But in September 1962 severe weather, and cramp, forced him to retire early. Out of the 55 who entered the Lake District Mountain Trial only one finished, George Brass, as Joss explained:

“I've now completed 51 Mountain Trials, but 1962 is the only year I started and didn't finish. On that day the weather was dreadful, with a storm coming through as the race got underway. Most of the field retired early on it was that rough. It was cramp that got me and I dropped down off Dollywagon with George Rhodes and John Disley.”

“Joss is still an inspiration to us and this time it was for tackling incredibly challenging terrain in his 80s. Not only was it steep on the ascent and descent but he kept up the same brisk pace regardless of conditions underfoot - from very uneven surfaces to heather and loose stone. It took him six hours and 20 minutes, including a stop for a sandwich and we ended the day in the local pub where Joss enjoyed a Guinness. It was also great to see so many people turn out to support him including his contemporaries Peter Hall, Peter Nelson and Ken Ledward,” added Scott Umpleby.

Anyone wishing to make a donation can do so via Joss’s JustGiving.

Drone footage and photos are available via Brathay Running Facebook.

Joss Naylor MBE secured his first Lake District Mountain Trials win in 1966 and has won the title 10 times. He has taken part in the Short Trial since 2007 as an MV70 (male veteran aged 70 plus) and is entered again this year (2019). At the peak of his fell running, in the 1970s, Joss broke the Lake District 24-hour record three times, won the Ennerdale Horseshoe fell race for a ninth consecutive time and ran the fastest known times on the Three Peaks, Welsh 3,000ers and Pennine Way. In 1976, he was also awarded an MBE for his work with sport and charity.

We work with over 7,000 children and young people every year, close to their homes or on a residential in the Lake District, inspiring them to make positive changes that last a lifetime, with programmes focusing on increasing their wellbeing.