Not quite a white Christmas 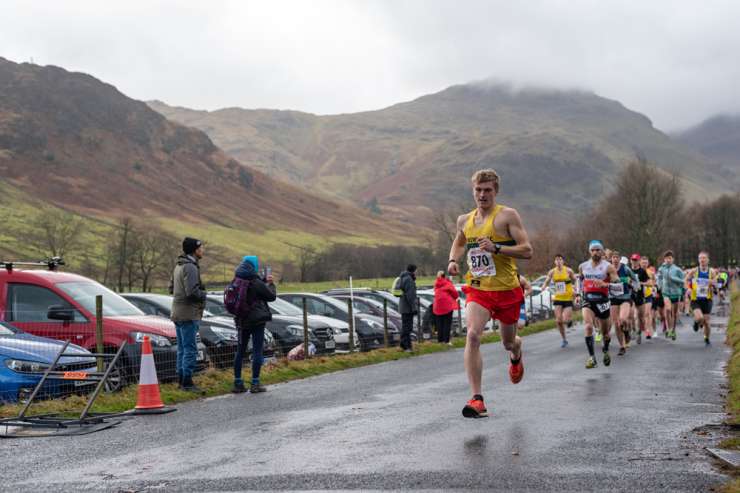 The start and finish line of the race, now in its 30th year, was at the New Dungeon Ghyll Hotel. Participants followed a new course taking in Elterwater village and Bayesbrown Woods and Farm before returning.

All those who crossed the finish line received a Christmas pudding and many ran in seasonally inspired fancy dress.

First back was Mark Lamb of Keswick AC with a time of 34:28. First female, hot on his heels, was Sarah McCormack of Ambleside AC who crossed the finish line in 35:41 finishing second overall.

Among those taking part was the Lib Dem MP for Westmorland and Lonsdale Tim Farron. He claimed his pudding by finishing in 59:33 and posted a picture on his Facebook saying he was "off to the pub".

The new race organisers, youth charity Brathay Trust, rebranded the fun run as the Gingerbread 3k, for ages 5 and up, in which 50 participants took part and got a gingerbread Christmas tree for completing the course. Langdale Primary School helped to organise the run and provided teas and coffees as a school fundraiser.

“The weather didn’t dampen people’s enthusiasm, particularly those who turned out in full festive costume like the turkey and the polar bears.

“It’s a great privilege to take over the organisation of this popular race which sold out after attracting 300 more runners than last year. It builds on the success of our first year of organising the Langdale Marathon and Half Marathon which took place less than two months ago.

“This 10k race raised about £7k to support our work with young people and is helping to establish our reputation for organising running events. Our next events are the Brathay 10in10 and the ASICS Windermere Marathon, both taking place in May.

“The event would not be possible without all our wonderful volunteers, marshals and, of course, our sponsors. They are the New Dungeon Ghyll Hotel who provided the venue, items for the refreshment station and prizes. Pete Bland Sports who gave us race numbers and prize vouchers and the Langdale Hotel, the previous organisers were a great help with the handover” added Scott Umpleby.