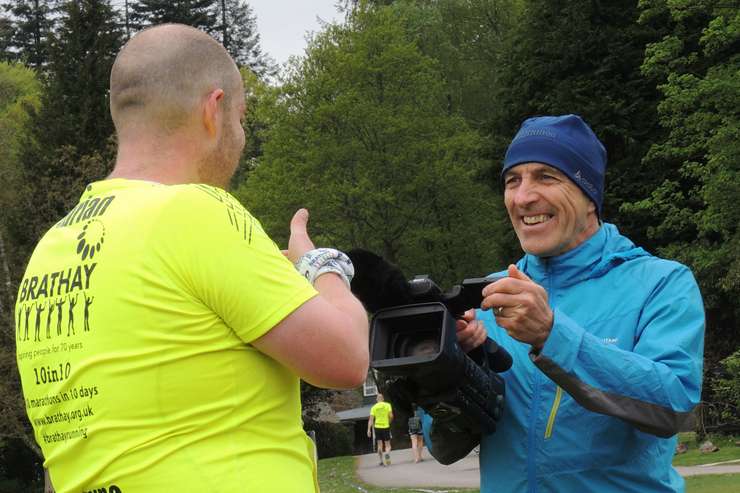 Fifty friends and family will run the ASICS Windermere Marathon on Sunday (21 May) in memory of a much-loved man who spent the last nine years recording the event.

Martin Campbell, who died last year, also photographed and videoed our 10 marathons in 10 days challenge; the last marathon is the ASICS Windermere Marathon. Both events raise funds for our work with disadvantaged youngsters of which Mr Campbell was a huge supporter.

Martin's wife Cecilia, who is organising the team run, said:

"Martin loved working with the runners at Brathay. I thought it would be wonderful if we – he – could continue to help raise money for the charity’s great work. ‘Team Camera Dude’ is a chance for us to get together to remember him including his sons Matt, Josh and Luke who are running.”

“Martin, first worked with Brathay in 2008 as photographer for the Brathay Windermere Marathon. He quickly became an integral part of the support team, and began filming the Brathay 10in10 in 2009. The daily films Martin produced between then and 2016 really captured the essence of ordinary people completing an extraordinary running challenge. Martin would film from dawn until dusk around the course. He would then edit the footage overnight so that the clips were available in the morning for friends, family and the wider running community to see.

“We also remember Martin, or ‘Camera Dude’ as he was lovingly called, for much, much more. His infectious enthusiasm, energy and empathy was shared with everyone he came into contact with. Many of those running on Sunday as part of ‘Team Camera Dude’ will be past 10in10ers. They will never forget the unique part he played in their daily challenge. Friends and family, including some who have never tackled a marathon before, are also part of the team taking up the challenge in his memory.

“Martin quickly came to understand Brathay’s unique approach to helping disadvantaged young people and the benefit of our projects in deprived communities. He shared our values of inspiring and supporting young people. It is a fitting tribute to him that that the monies raised in his name will fund a special youth project and that he will continue to change lives for the good.

“The event this year will be emotional for many of us who remember the vital role he played over the years” added Aly Knowles. “It’s a fitting way to remember Martin, we only wish he was here to film it.”

Over 70% of a £10,000 target has already been raised. Anyone interested in making a donation can visit the JustGiving page here.