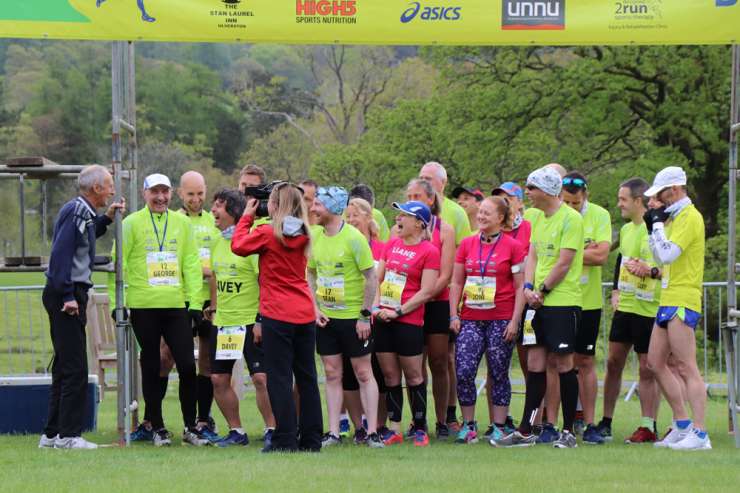 The largest number of runners yet set off today Friday (11 May) to tackle the same marathon every day for 10 days in an anti-clockwise direction around England’s longest lake, Windermere.

Five women and fifteen men, from their 30s to their 60s, hope to join the list of 104 runners to complete one of the UK’s most gruelling multi-marathon challenge events, and all for charity.

Since the first Brathay 10in10, in 2007, the efforts of ordinary runners doing the extraordinary has raised over £1million for our work with children and young people.

In the 11 years since it has run, the record for the fastest time is held by the youngest entrant, Adam Holland. In 2010, he ran it in 30:24:54, averaging 3:02:05 for each marathon. The oldest person to complete the challenge, twice, is John Dawson. At 73-years-old, his average marathon time in 2011 was 7hrs and 8minutes. At 64-years-old, Angela Oldham is the oldest female to complete the 10in10 with an average time of 4hrs and 24 minute for each of her marathons.

This year’s cohort once again represents a mixture of running ability and experience. Newcastle’s Adrian Brooks, a member of the 100 Marathon Club, once weighed more than 26 stone and could barely run for more than five seconds. He is back for his second Brathay 10in10. And Malcolm Collins from Greater Manchester is returning for his fifth 10in10, having notched up over 250 marathons he is also a member of the 100 Marathon Club. Malcolm is hoping knee surgery in December won’t prevent him from completing the course.

Janet Shepherd is celebrating her 60th birthday with a return to the 10in10. She marked her 55th with a 10in10 despite very little marathon running experience. The fitness trainer helps the over 70s get into exercise and is keen to champion this message.

The first father and daughter duo to run the 10in10, proving that running must be in their genes, is Gary Wade from Holmfirth and Joni Southall from York. Gary, a member of the 100 Marathon Club who manages running with diabetes, knows the course well as the ASICS Windermere Marathon which he has run 11 consecutive years. Joni is also an experienced runner who hopes to have run 50 marathons by the end of the year.

The two runners who are local to the course are Duncan Evans, who is the manager at the Ryebeck Hotel in Bowness, and John McCann, a member of Kendal Athletics Club who lives in Morecambe. John, who is 66-years-old, is a keen advocate of older runners.

Brathay’s Head of Fundraising, Scott Umpleby, who is a committed fell runner and member of Kendal Athletics Club knows the 10in10 course well having run it a few times as a single training marathon. Scott therefore understands the enormity of the mental and physical challenge facing the 10in10ers. He said: “We have a huge amount of respect for the wonderful running community who have been there for us and the children and young people we help since we first introduced our fundraising running events. We have the privilege of supporting these amazing people with this incredible challenge. Since it started they have raised over £1million for work with children and young people across the north of England.

“The wider running community’s response to Matt Campbell’s death during the London Marathon, and also his dad Martin who was a big part of the 10in10, has been phenomenal. Some of the 10in10ers knew Matt and Martin and they will be remembering them in individual ways as they run a marathon each day for the next 10 days” added Scott.

Recognised as one of the UK’s ultimate endurance running events, it was devised by academic Sir Christopher Ball, as a Fellow of Brathay. He ran it in 2007 aged 72, to prove that ordinary people can tackle extraordinary feats of physical and mental endurance.

The final marathon for the 20 fundraising heroes is on Sunday 20 May when the course coincides with the one day ASICS Windermere Marathon, which over 1000 runners have signed up for.

Videos and updates from each day of the 10in10 will be shared via Twitter @BrathayEvents and Facebook @BrathayRunning.